A CRITICAL ASSESSMENT OF THE IGBO-UKWU ARTS AND EXCAVATIONS

Igbo Ukwu is an African Iron Age archaeological site located near the modern town of Onitsha, in the forest zone of southeastern Nigeria. Igbo-Ukwu was discovered in 1938 by workmen who were digging a cistern and professionally excavated by Thurston Shaw in 1959/60 and 1974. Eventually, three localities were identified: Igbo-Isaiah Igbo-Richard, and Igbo-Jonah.
Also Read 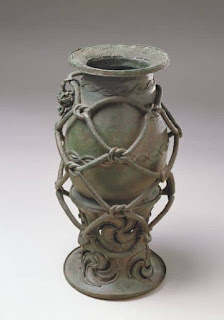 PREFACE
Igbo Ukwu is an African Iron Age archaeological site located near the modern town of Onitsha, in the forest zone of southeastern Nigeria. Igbo-Ukwu was discovered in 1938 by workmen who were digging a cistern and professionally excavated by Thurston Shaw in 1959/60 and 1974. Eventually, three localities were identified: Igbo-Isaiah Igbo-Richard, and Igbo-Jonah.  For an easier clarification of the study, it was broken down into chapters. Chapter one introduced the concept to be discussed as well as its historical background. Chapter two addresses the Igbo Ukwu Site, its early discovery and its arts and excavations while Chapter three concludes the topic discussed.

CHAPTER ONE
INTRODUCTION
Igbo-Ukwu is a town in Anambra state of Nigeria in the southeastern part of the country. The town comprises three quarters namely Obiuno, Ihite, and Ngo with several villages within each quarter and thirty-six(36) administrative wards. The town is located along the major road running from Nnewi to Aguata and is 40 kilometres South-east of Unitsha. Igbo-Ukwu town is made up of seven villages namely: Obunu, Ngo, Umudege, Ezihu, Akukwa, Etiti and Ezigbo. These villages are sub-divided into kindreds. The village is the basic unit of political organization, while traditional government is carried out through two institutions: (i) a Council of elders which is made up of family heads who hold the 'ofo, (staff of their different families), (ii) the village assembly of which every grown-up male is a member. Matters regarding tradition, customs and rituals are referred to the council of elders which is made up of the 'Nze na Ozo' (the titled men) while important matters or policy affecting the life of the villagers are decided by 'the village assembly on the basis of consensus. This takes place either in the village square or at a designated place.
1.1 Historical Background
According to history, the original name of Igbo-Ukwu was 'Igbo'. However, in 1942, the word 'Ukwu' was added to it to distinguish it from the other Igbo-speaking people. The nearest neighbours of Igbo-Ukwu are: Oreri, Ichida, Azigbo, Awka-Etiti, Nnewi, Amichi, Ikenga, Isuofia, Aguluzigbo, Umuona, Ekwulurnili and Ezinifite. These towns have and share the same art and other cultural traditions with their Igbo-Ukwu neighbours.
It is not yet known when/Igbo-Ukwu occupied their present settlement. According to recent archaeological discoveries (Shaw, 'l970), it is believed that some ancient Igbo-Ukwu people settled in this area earlier than 9th century A.D. Accordiny to R.E. Afigbu (1980), Igbo-Ukwu falls into the geo-cultural region of Awka- Okigwe-0rlu which,as this author has suggested, forms the core of the Igbo culture and history, It is this core that represents the Igbo cultural nucleus and contains the most flourishing traditions of the Igbo evident in wood carving, iron working as well as ritual specialization of the Nri diviners and medicine men, Based on linguistic evidence, he has sugqested that the people settled in this area about three thousand years ago. If one relates this evidence to the 005 AD date For the Igbo-Okwu bronze objects, then one can easily suggest great antiquity for the Igbo-Ukwu bronze objects, their history and cultural traditions.

That point in time You recall you didnt write out a table contents. Pardon my Manner. Here is the Table of contents! Oya Hit me