Moral life has degenerated among Anambra people from what it used to be in traditional times thus leading to the birth of this research work.
Also Read 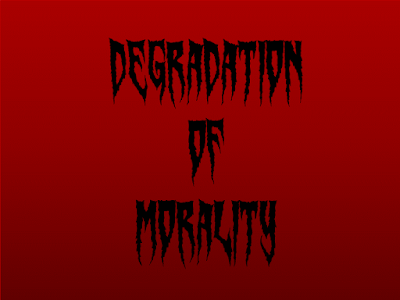 Welcome to todays blog post on Degenerating level of morality in Igboland; using Anambra State as a case study. For Complete Material, comment below or contact info@funaiwhistle.com; Chat up on whatsapp on +2348167788957. All materials and full docx format available in google drive.

The devastating problem confronting our nation Nigeria is the general decline in the level of discipline and morality. Gone are those days when morality and discipline used to be cherished virtues. Today, it is the exact opposite. We now live in a decadent society where morality and discipline are thrown overboard. It is a pity to see our society which was once upright and had a strong existence of standard moral values become so decadent. The problem is not limited to the secular aspect of our society, even religious circle. Imagine a situation where a pastor puts a female member of the church in the family way and calls for extravagant ceremony when she gives birth to a baby! What about a school teacher who puts his own sixteen-year-old female student in the family way because of undue assistance rendered to her in a promotion examination. Bank loans are not granted to customers with good intention but bad ones whose aim is to borrow and never pay back. However, the bank manager aids and abets such cases because such loans are "shared" equality between the borrowers and the managers even without any physical collateral. The managers themselves use fictitious names and documents to steal millions of money from the banks.

According to Okafor (2004:103), “the Igbo are one of the three main ethnic groups in Nigeria. They take their name from their language - one of the Kwa subgroups in the Niger-Congo or Niger-Kordofanian family. In Kwa, the word Igbo, either as prefix or suffix, connotes forest, farm or forest dwellers.” The origin of Igbo people cannot be easily traced as a result of lack of records which will help to explain the period, place of settlement and origin. According to Ilogu (1974:11) “where the Igbo came from and when, will remain for a long time, a matter of conjecture because of the absence of helpful records of archaeological findings by which we can determine date of settlement or place of origin.” However, Shaw (1977:18) “maintains that “through oral traditions recorded by ethnologists, historians and some available archaeological findings, little has been known about the origin of Igbo people. Through these sources, it was found that Igbo-Ukwu area had been a centre of Igbo civilization which dates as far as ninth century B.C. or even more.”

Okafor (2004:103) maintains that “Igbo homeland is the forest region of South-eastern Nigeria with outcropping to the West, and lying between longitudes 6° and 8° East and latitudes 5° and 7° North. They live mainly to the east of the lower Niger with a small extension on the West Bank.” In the views of Ifemesia (1980:15), “Igbo dispersed at different periods in various directions to the South and South-East, towards the Eastern Delta and the Cross River area; to the North and North-East, towards the Agwu-Udi – Nsukka highlands; to the west, down the hinterland of the left bank of the Niger, across the river, and southwards to its western delta and back again to the left bank.” Out of the present 36 States structure of Nigeria, the Igbo occupy - Enugu, Ebonyi, Abia, Anambra and Imo State where the density of population is very high.

The boundaries between these States are more or less arbitrary, fixed sometimes for geographical and sometimes for political and cultural reasons. According to Ezeigbo (2007:12), “there are also many Igbo in the surrounding States such as Delta, Cross River and Rivers. Out of the 88.5 million Nigerians (1991 Census) about 12 million are Igbo. On this note, this study focuses on the degenerating level of morality in Anambra state.

Morality: For the New International Webster‟s Comprehensive Dictionary of The English Language, Encyclopaedic Edition, the word „morality‟ is derived from the Greek word: Ethika, (Latin moralia) meaning morals. The etymological root of Ethica is the Greek 'ethos'(Latin mos,) and means mores, conduct, custom or way of doing, acting or behaving. Morality is the quality of being in accord with standards of right or good conduct. A system of ideas of right and wrong conduct. The word morality comes from the Latin "moralitas," which has to do with character or proper behaviour. It refers to the concept of proper human action in terms of "right and wrong," also referred to as "good and evil."

Decadence: The word decadence is marked by decay or decline, relating to or having the characteristics of the decline. It is a process of deterioration or decay. According to Hume, (1975:31) “it could mean a condition or period of decline with regard to morals. Decadence states a falling from a higher standard to a lower state. It is a process of decline or decay in a society, especially in its morals. Decadence can refer to a personal trait, or to the state of a society (or segment of it). It is used to describe a person's lifestyle; it describes a lack of moral and intellectual discipline, or in the Concise Oxford Dictionary: “a luxurious self-indulgence.”

Religion:  The New Webster‟s Comprehensive Dictionary of the English Language defines it as “a belief binding the spiritual nature of man to a supernatural being, as involving a feeling of dependence and responsibility, together with the feelings and practices which naturally flow from such a belief.” More comprehensively, religion is defined according to Merriam (1980:250), as "the outward act or form by which men indicate their recognition of the existence of God or of gods having power over their destiny, to whom obedience, service and honour are due; the feeling or expression of human love, fear or awe of some superhuman and over-ruling power, whether by profession of belief, by observance of rites and ceremonies or by the conduct of life."

2.2    Morality in Igbo Perception
The common characteristic of every Igbo society is the existence of norms called “omenala” that is, what happens on the land, as the dictates of the earth goddess, or norms that were made by the society but handed over to the earth goddess for guidance.