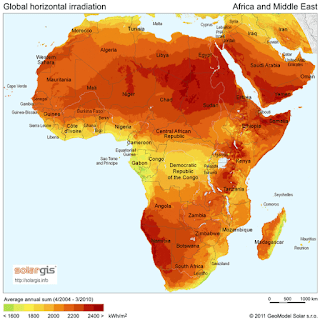 Climate change presents very real development challenges which, under certain circumstances, may contribute to the emergence and longevity of conflict. Recent research broadly agrees that four main climate links to conflict in Africa may emerge. First, reduced water supply and growing demand will, in some places, lead to increasing competition between different sectors of society, different communities and different countries. Under certain conditions, such as poor governance and existing ethnic division, these stresses may turn violent. Second, reductions in crop yields and increasingly unpredictable weather patterns around the world may lead to higher prices for food and greater food insecurity, and increase the stakes for control over productive agricultural land. Third, changes in sea level, increased natural disasters and the reduced viability of agricultural land may cause large-scale and destabilizing population movements. Finally, the cumulative impact of all these challenges on the prevalence of poverty and the ability of governments to provide services to their citizens could be a factor that tips fragile states towards socio economic and political collapse.

Many factors impact on the probability of armed conflict. Poverty levels, natural resource endowments, population characteristics, ethnic and religious fractionalization, education levels, geography, as well as previous conflicts, are all factors that constrain or facilitate conflict. Climate change is only one of the many security, environmental and developmental challenges facing Africa. Climate change is, in effect, a ‘threat multiplier’ that makes existing concerns, such as water scarcity and food insecurity, more complex and intractable. However, it is non-climate factors (such as poverty, governance, conflict management, regional diplomacy and so on) that will largely determine whether and how climate change moves from being a development challenge to presenting a security threat.

Clearly the challenge of climate change is one that is beyond the capacity of any one country to tackle. Ultimately, its shared developmental and security implications will be best resolved through cooperation at a myriad of levels: cooperation to develop comprehensive international strategies to manage migration, to share the most innovative approaches for adaptation, to administer shared resources and to cope with insecurity.

Africa: Africa is the world's second largest and second most-populous continent (behind Asia in both categories). At about 30.3 million km2 (11.7 million square miles) including adjacent islands, it covers 6% of Earth's total surface area and 20% of its land area. With 1.2 billion people as of 2016, it accounts for about 16% of the world's human population. The continent is surrounded by the Mediterranean Sea to the north, the Isthmus of Suez and the Red Sea to the northeast, the Indian Ocean to the southeast and the Atlantic Ocean to the west.