Music in Ohafia war dance - An analysis of ikperikpe ogu

Music in Ohafia war dance
Also Read
The Ohafia people are very warlike and are dreaded cum skilful head-hunters. The need for rituals of appeasement, propitiation and appreciation, which were elaborate ceremonies involving music, dance and poetry has been located within the world-view of the Ohafia man. Thus, it seems correct to hold that Ohafia men aspired to attain the height of fame and prowess by washing their cutlasses in human blood. Great satisfaction was derived from bringing home the head of a defeated enemy for this was an indication of strength, prowess and bravery. A man’s identity in the community became synonymous with the number of heads he brought home. Hence, once there was (in their reckoning) justifiable reasons to do so, the Ohafia would go to other towns, besiege them and return with human heads. It is said that the warriors carried the heads in traditional rectangular baskets known as ‘Abo’ (a cane basket). Each warrior carried his own ‘Abo’ with his acquired heads as they returned home. The people hailed them, and welcomed them, with songs. They used ‘Uri’ (cam wood) to design their bodies and tied ‘Nza ebulu’ (ram’s mane) on their arms to distinguish themselves as heroes. All these were part of the purification intended by the ritual cleansing. At the end of the ritual cleansing which was signified by the killing of a goat and sprinkling of its blood on the warriors’ feet the ‘Ikoro’ called the names of the warriors and they all sprinted about in the village square demonstrating their war antics. This was closely and immediately followed by the ‘Iri Aha’ or war dance.
The Ohafia thought of an aesthetic means by which the Ohafia legacy, history, social values and war tradition would be preserved and transmitted from generation to generation led to the formation of a dance group which transformed the ‘Iri Aha’ into a performing art was an articulation of the people’s response to that need, and this brought Ikperikpe Ogu into existence. 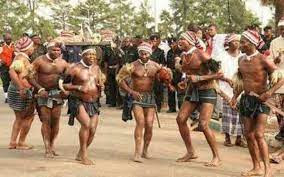 CHAPTER THREE
CONCLUSION
The role of music in the Ikperikpe festival in Abia Ohafia community cannot be underestimated in that music occupies a predominant position throughout the celebration. According to lyeh and Aluede (2008:93), "Chernoff said that a village where there is no musician is not a place where human being can stay". Music is said to be the life-wife of the Ikperikpe festival. Various aspects of musical activities displayed at the preparatory periods of the festival help to create awareness as well as awaken the spirits of the gods and ancestors that are consulted or worshiped.
Secondly, the Ikperikpe Ogu music serves as a social commentator especially as it employs the declamatory speech technique to recount some historical events of the community in addition to praises on both past and present heroes. This situation is similar to stone's (1998:411) observation that "People enjoy a passion that moves them to dance, sing, and weep when occasion demands it." The musical effects of the Ikperikpe Ogu dance often drive the celebrants into trance and frenzy state especially at the climax of the instrumentation. Apart from the above, Ikperikpe dance and other aspects of chanting from the youths make the atmosphere quite exciting and entertaining as some members even dramatize their occupational trades as they dance.